A few things I finished recently:

–Jackie Collins’ “Deadly Embrace”. I forgot when I started it, and while it’s not on the same level as “Lucky” or “Hollywood Wives”, it was still a compelling read and another proper addition to the story of Madison Castelli that goes all the way back to the LA Connection series (which I highly recommend!). I could’ve done without the storylines of Michael’s other children, as I felt like they didn’t add anything to the main storylines that were Madison’s kidnapping and the history between Michael and Maddy’s real mother Dani. Also, in my years of reading JC’s books, one thing I really could’ve done without was her female protagonists referring their fathers as “daddy”. It’s one thing if they’re kids, but as grown-ass women?! Oh, Jackie, you’re still my literary queen, but that was a choice.

–Bookshelf shopping. Another thing that kept me from posting a bunch of nonsense here in the past month was me doing some remodeling in my studio. Long story short, I freed up some floor space to bring in some bookshelves! I had a bunch of books and vintage magazines in storage for years, and now they return to their rightful display on a bookshelf! And big-ups to SF’s Craigslist for all the great deals! I spent a total of $95 for four assembled IKEA bookshelves (and three of those models are backordered at IKEA stores). One of them normally goes for $149, but I bought it for $30! Say it with me: steal!

Two of my bookshelves. I’m still arranging some stuff here, and don’t be surprised that I own a book on butts.

–And, finally finally, my story!!! I had to whittle its word count, but I also made more edits to it. (I can be an edit whore.) It’s still a big-ass amount of words for a debut novel, but I am going the eBook route to publish it. So anyone who likes looooong fictional reads that’s also LGBT-friendly, racy, and suspenseful, I’ll keep you posted!

I have to wake my ass up early for a tech study I’ll be doing in less than eight hours from now. But I’ll always have time to wish my blog a happy cake day! It officially enters its terrible twos today, meaning there will be more whining and tantrum-throwing in my posts! (Assuming I’ll have time to post it all.)

The header pic was supposed to show the latest addition to my slut arsenal, but I think such images are a no-no in WordPress Land, thus the GIF above that could also be a metaphor for this post. Anyhoo, I’ll be taking the “hump” in Happy Hump Day seriously after I finish up this post. This arrived in the mail yesterday, and yours slutty is now the proud owner of a high-end object of affection that I got for half off its original retail price! Lelos may be fancy-looking, wallet-breaking nut-busters, but I’m now making more money since returning to my massage job, and they also had a big sale over a week ago–coincidentally, right when my last vibe died. My old vibe died so a Lelo can live (in my bed). Oh, why I am writing…I got a new toy to play with!

Josh Duggar arrested by the police, Rudy Giuliani's apartment was raided by feds and Derek Chauvin was found guilty of murder. Looks like 2021 isn't going to be a White Boy Summer. pic.twitter.com/SVcSQGfPmh

Yours trampy got tickets to tonight’s game featuring the co-best team in the National League at the moment (and some other team). Happy Tuesday to meeeeeeeee!

Another update 4/28: Why didn’t they do this when I was there yesterday?!?! Rabble rabble rabble!!!

I still have to pack for my trip, so I don’t have time to roll up a joint right now. But to all the potheads out there getting lifted today, Happy 420!!!!

This is the only news you need to know today, as it involves me: I got a week off from work. It’s actually nine days I have off, since I start my work week on Thursdays. But this break is looooooong overdue! How? I haven’t taken a decent break off from work since I started the temp job a year ago. I may have taken a day or two off from it, but nothing like this break that starts today. Just a year ago, I was working long hours for 4-5 days a week. Now, yours slutty gets a spring break!

Well, without the big party crowds and tit-flashing to strangers. And what’s the first thing I’ll be doing on my spring break? Going to the dentist. For reals–I got an appointment in less than 12 hours.

Also, since I’m fully vaccinated and I got some extra change in my pocket (thank you, stimulus check), I get to be a travel slut in real time again! I’m not going far–just a little drive down to Santa Cruz in a couple of days. Don’t worry, I got my mask, I’ll be keeping my distance from others, and I’ll only be ordering food to-go. (As long as bitch-ass Covid and bitch-ass Covid-deniers still exist, I’ll still be leery over eating indoors.) I welcome back the grind of packing for a trip! 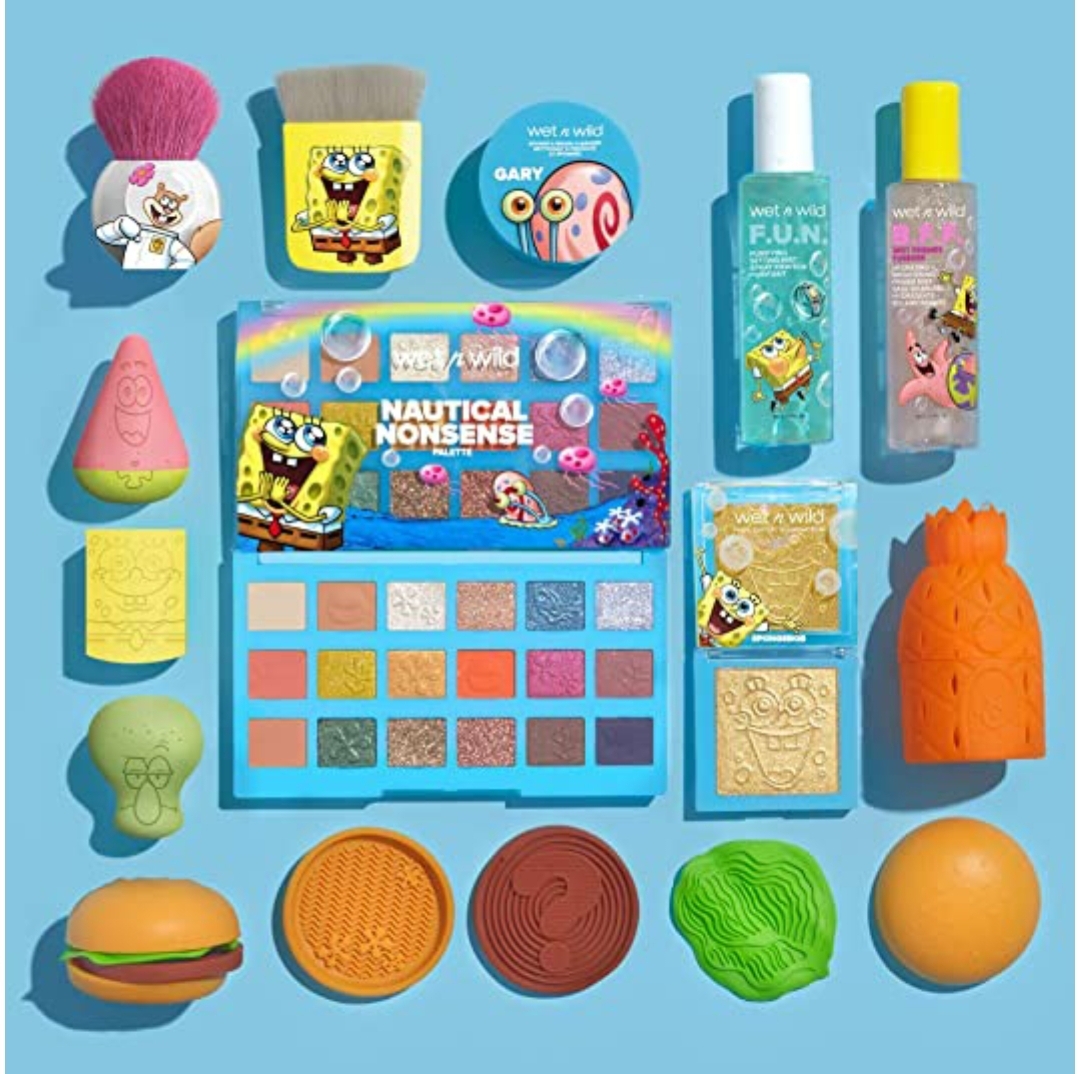 Leave it to Wet-N-Wild Beauty (makers of my favorite contour palette) to take me away from the dreary news of today and deliver a palette cleanser of a collab that sings to the Bikini Bottom resident in me: Spongebob Squarepants-themed makeup! Yes, something like this has been done before, but maybe it’s fitting that a brand called “Wet-N-Wild” nail the collab. ‘Cause, you know, “wet” being the environment Spongebob lives in, and “wild” being Spongebob and his boating skills. (I know–I’m putting too much into this.) Finally, those Spongebob-themed Makeup Erasers have met their match! And I never knew I wanted a Spongebob glow-up and Squidward’s resting bitch face blending my makeup until now.

But wait! Where is the Coral Blue #2 semi gloss lipstick?! (Why are there no lippies here, by the way?) And a blush called Sandy Cheeks? Missed opportunities there, Wet-N-Wild.

Those two weeks of waiting for the Covid vaccine to fully kick in got me kind of anxious, though. Like, worrying if the wind would blow a new strain of The Rona onto me on the off-chance I had my mask off while taking a walk outside, thus ruining me and the vaccine’s efficiency. (For the record, I take the mask off when there’s no one nearby.) But now that I’m fully protected (or so the CDC says), I am so gonna live it up like a validation-starved influencer and get my free donut at Krispy Kreme! (What, did you expect me to go party in crowds again?) Fuck yeah, living!

Thirty years ago this month, my six-year-old self almost met the Grim Reaper by accidentally falling into the deep end of a pool while on a family vacation in the Philippines. I didn’t know how to swim then. And thanks to that near-death moment, which rendered me a total wuss-ass around deep ends of pools and other bodies of water, I still don’t know how to swim. (I’ll take swim classes one day, I swear.) But you can thank my cousin Sunny for saving me. I guess she saved me right away because I do remember not having to be hospitalized or experiencing anything serious after. Sunny still lives in the Philippines, and if she ever reads this post, I just want to say once again…