After sifting through a deluge of doomer posts (mostly inaccurate takes) on Reddit today, then checking out Twitter for updates, I think it’s best to focus on the positives from Election Day 2020.

But I must say this first: that the most important race in this election was not decided quickly in a massive defeat for Orange Hitler and that it’s supposedly close last time I checked (I’m not checking it now; it’s too late for that nerve-wracking shit) shows that regardless of who ends up being the winner, this country got mad problems. Take your pick on what/who to blame, whether it’s voter disenfranchisement, inane selfishness, or being brainwashed by right-wing propaganda. Or all three and then some. The past few years, I considered myself to be a Californian over an American, but I had hopes that this election (and not just the race for president–or evil overlord, in Chump’s case) would change that. Pfft.

Also, for those who were pinning their hopes on Florida to go blue this time, The Simpsons knew that state the whole time… 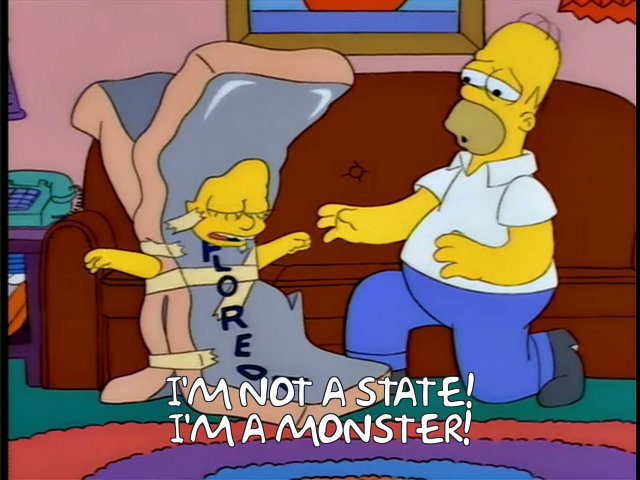 My apologies to the Floridians who did their best to turn their state blue. (Hang in there; we’ll be needing you all for the long haul!) But I needed this laugh! And having old Simpsons episodes on TV while checking out election updates online (no way was I watching the news channels) helped curbed the anxiety for me.

Onto the positives (so far)…

—Oregon rules! Now if they decriminalized all that 15 years ago when I was more experimental with, uh, things, I would’ve looked like a haggard old druggie ho now, and I’m in my mid-30s.

—Arizona rules in more ways than one.

—Delaware rules! (And if you want to escape that pesky paywall, I recommend archive.fo)

I know I’m forgetting some stuff and I hope I get to add more to this list when I wake up. Right now, I need my blunt. Now if only California could decriminalize ‘shrooms, too.